According to reports on the Internet and sources at Destination PlayStation, the PlayStation Store is finally getting a graphical user interface makeover. The store makeover is planned to arrive alongside Gran Turismo 5 Prologue on April 15. The revamp of the PlayStation Store is said to give it a look more in tune with the SingStore (pictured below) which is already accessible from the PlayStation 3 version of SingStar. The exact details of the change has not been revealed but it is said that navigation would change to a series of icons running along the bottom of the interface. We don’t have official confirmation on this one yet, so consider it rumor for now. 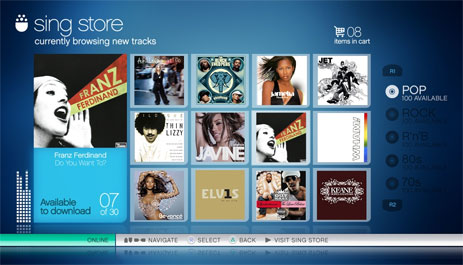