Rolling out across the SCEE territories from 13th July, and in all territories by 1st August, the new Starter Pack represents exceptional value for money as an entry point into the exciting world of High Definition interactive entertainment with PLAYSTATION 3.

The choice of first party games available in the Starter Pack will vary to suit the interests of entertainment enthusiasts in each country, but will include million sellers such as Resistance Fall of Man and MotorStorm; titles specifically chosen to demonstrate the stunning graphics and enhanced gameplay of High Definition games on Blu-ray disc.

With an additional wireless SIXAXIS, motion sensitive controller provided for head to head and multi player gaming, the Starter Pack is sure to appeal to those seeking to enhance their entertainment experience with the best of 21st century technology. 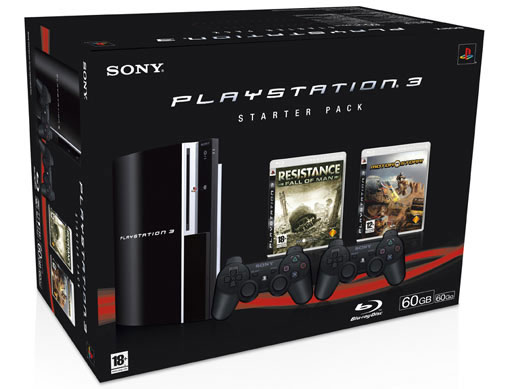 “With sell through of over 1.2 million units in the SCEE territories to date, PLAYSTATION 3 has proved to be an instant and huge success”, said David Reeves, President of Sony Computer Entertainment Europe.

“The exceptional value of the new Starter Pack will bring the excitement of PlayStation gaming to a much wider audience. Add to this a stellar lineup of software titles for the second half of the year and we are confident that this amazing value Starter Pack will encourage many more keen gamers to join the PLAYSTATION 3 community”.