Following from our previous article, new information has come to light regarding the 80GB PS3 Model. According to PS3 PR chief Dave Karraker, the red light is a result of a lighting effect and that there’s no change in the original controller whatsoever. The official PS3 blog explains that the PS button glows red when the debug controller is charged. Games Radar reports that the debug controller’s PS button does glow red when charging (see below), confirming the PS3 Blog Post. 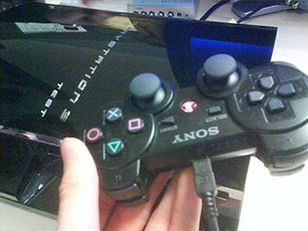 From the photo above you will notice several differences between the ‘debug’ and regular PS3 kit. The PlayStation 3 has “TEST” written on the console itself while the SIXAXIS controller does not bear the word “SIXAXIS” like the regular ones. The controller’s PS button is also has a red glow, but not the same as the one on the box of the 80GB model.

Some speculate that the glow can be enabled via a Firmware update, while others believe that Sony is keeping a lid on things until E3. Either way, we will hopefully find out the truth in a few days.