Despite the Xbox One requiring gamers to pay a fee to play a second-hand game, GameStop President, Tony Bartel, has told Forbes that the company will still sell pre-owned Xbox One and PlayStation 4 games. For Xbox One owners, it will mean that consumers will have to pay for the game twice – once at point of purchase and again on Xbox Live.

PSN Downloads may become transferable in the near future after a European Court ruling. The European Court today confirmed that end-users are legally allowed to sell on second hand digitally downloaded video games. This could mean that Sony will make PSN titles transferable to comply with the ruling. 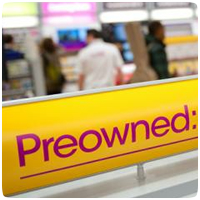 Michael Pachter, analyst and all round videogames industry celebrity, has urged Sony and Microsoft to consider the impact that locking out pre-owned software will have on consumers. Both the PlayStation 4 and next Xbox may potentially lock-out second-hand games, but Sony’s Jack Tretton went on the record to say locking out used games is “anti-consumer”.

Publishers have long claimed that second-hand games are hurting the industry, which has lead to the rise in online Passes to access multiplayer content as a way to make some money from second-hand games. The PS4 has been rumored to block used games, but Sony’s Jack Tretton said that he was “opposed to blocking used games.”