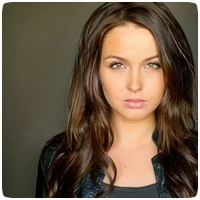 The actress, known for her role in Californication as Lizzie; Claudette in True Blood; and as Kate Middleton in made-for-TV movie William & Kate, has been revealed as the voice behind Lara Croft in the upcoming Tomb Raider game. Camilla Luddington also provided motion capture acting for the game too – the first time the same actress has bee used for both roles.