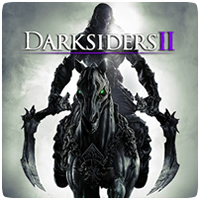 THQ has released a new trailer for upcoming sequel to Darksiders. The trailer, titled ‘Death Comes for All’ shows Death, one of the most feared of the Four Horseman of the Apocalypse,  taking on The Crowfather as the Earth once again finds itself caught in the crossfire between Angels and Demons.

THQ has released a new trailer for Darksiders II, in which a holy man preaches about the coming of Death and that’s exactly what happens. Darksiders II: Death Lives launches on consoles in August, and you can pick up the first title for free if you are a PlayStation Plus subscriber.

Although THQ hasn’t revealed an exact date for the Upcoming Darksiders sequel, Danny Bilson of THQ has revealed that the game is scheduled for release in June 2012. In Darksiders II, you’ll take on the role of “Death,” one of the dread Four Horsemen of the Apocalypse, in a weaving adventure that runs parallel to the events of the original game.