EA are giving away five different expansion packs for Battlefield 4 for free, over the next week or so. Why? Because EA wants everyone to join in on some Battlefield 4 action before Battlefield 1 releases on October 21st 2016. The only catch is that each DLC will only be free for a certain number of days, and not all at once. The DLC is free across all platforms, including the PS4 and PS3.

A comparison video has been released by DigitalFoundry, comparing the PS4 and Xbox One version of upcoming title Battlefield 4. The video confirms that the PS4 version of he game runs at a resolution of 1600×900, while the Xbox One version is just 1280×720.

EA have revealed that an open beta for Battlefield 4 on the PlayStation 3, Xbox 360 and PC will launch in October, ahead of the game’s release on October 29th. In addition, the release dates for the PS4 and Xbox One versions of the game were also revealed, with the PS4 version available on November 12th in North America and November 29th in Europe.

DICE, a studio of Electronic Arts Inc, has announced that the highly-anticipated action blockbuster Battlefield 4 will be available this holiday for early-adopters of the next-generation hardware systems: Xbox One, and the PlayStation 4. The game was previously announced for the Xbox 360, PS3 and PC, but was confirmed for next-gen consoles too at the Xbox One event yesterday.

EA has officially announced Battlefield 4, which will be powered by the Frostbite 3 engine to “provide a visceral, dramatic experience unlike any other.” The game is in early development but is already available to pre-order from the Origin Store. The game starts with the evacuation of American VIPs from Shanghai and follows your squad’s struggle to find its way home, with the player taking the role of Recker. 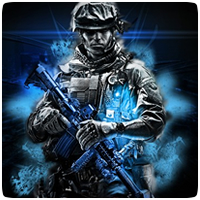 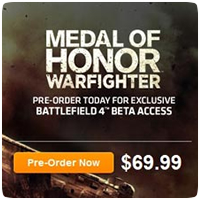 An advert found on EA’s digital distribution service Origin, has given the first confirmation that Battlefield 4 is coming. The ad offers Battlefield 4 beta access to players who  pre-order Medal of Honor: Warfighter, which is set to hit later this year.